“Legislature should raise the minimum wage to $15, without delay” by G. Hooser as published in the Honolulu StarAdvertiser

Every Hawaii legislator will receive a pay raise starting January 2021. Likewise, the governor, the lieutenant governor, all state judges and most top executives in state government will receive substantial pay raises.

Minimum wage workers will get nothing.

Legislators accepted their own pay raise with one hand, while blocked a raise for low-income workers with the other.

Multiple hearings were held on House Bill 1191 during the 2019 session. Thousands of people from all walks of life testified in support. Many took off from work and others paid to fly in from the neighbor islands. Countless hours were spent, waiting patiently for their name to be called, to offer heartfelt and compelling testimony.

As a result, HB 1191 was amended to increase Hawaii’s minimum wage to $15 per hour (phased in), and ultimately made it to the final conference committee. But the state House then pulled the plug: The excuse given was that a provision intended to help business was “possibly flawed” and there was not enough time remaining in the session to fix it.

Rather than pass a strong, reasonable minimum-wage measure phasing in a $15 per hour wage over several years, the joint House/Senate conference committee swallowed the poison pill provided to them by the business community and killed the entire measure.

Rather than pass the bill, they chose to pass the buck, doing nothing for another year. The consequences of this decision are devastating to Hawaii’s working families who will never catch up on the lost year. Some stats:

>> $17.50 per hour (approximately) is a “subsistence” wage for a single person without children. This means a person needs $17.50 an hour to simply survive, show numbers from the state Department of Business, Economic Development and Tourism.

>> 48% of Hawaii residents are either already living in poverty or one paycheck away from being on the streets, according to the ALICE Report.

>> Hawaii leads the nation in the number of houseless, per capita, says the U.S. GOV Council on Homelessness.

With January 2020 opening the second year of the Legislature’s biennium session, legislators could simply, if they so choose, pick up bills exactly where they were left off at the end of the 2019 session.

HB 1191 HD1 SD2, increasing Hawaii’s minimum wage to $15, remains stuck in conference committee purgatory. Upon start of the 2020 session, with the concurrence of Senate/House leadership, the committee could schedule a hearing, amend the bill as needed and pass it to the floor for a full vote. In two weeks, by the end of January, it could be done.

There’s no reason to force thousands of citizens to jump through the hoops of multiple hearings in the House and Senate, to take off work, arrange childcare, and incur the cost of traveling interisland — only to end up in exactly the same place.

Legislators have had many months since the close of the 2019 session to work out the kinks, meet with stakeholders, staff and the administration. They could, and should, have already come to an agreement on a clean bill, one that can be passed promptly upon the opening of the 2020 Legislature.

Regarding potential negative economic impacts of raising the minimum wage, the data is unequivocal: There is no credible research correlating elevated levels of unemployment, bankruptcy or inflation when wage increases are phased in gradually.

While not a living wage, or even a subsistence wage, $15 represents a strong step in the right direction. If tied to annual cost-of-living adjustments and future modest incremental increases, eventually a true living wage would be achieved.

Imagine that: A future where every Hawaii resident who works a 40 hour week can afford a dry, safe place to live, three meals a day and basic health care.

Published November 7, 2011 – in the Honolulu StarAdvertiser 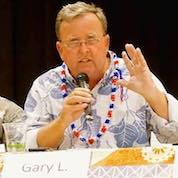 1 Response to “Legislature should raise the minimum wage to $15, without delay” by G. Hooser as published in the Honolulu StarAdvertiser