There were strong rumors that there would be an attempt to “pull the bill to the floor”, and force a vote on the HD2, which extends the ability of Alexander & Baldwin (A&B) and others to divert mountain streams and use millions of gallons of water daily, without acquiring long term permits (and associated environmental protections).

Last week following the Hawai’i State Senates first and only public hearing, after 6 hours of overwhelming testimony in opposition, decision making finally occurred (kind of but not really).

The joint committee of Water Land and Ways and Means (WAM) convened, and the Water Land Chair, Senator Kai Kahele announced a proposed amendment to take Alexander & Baldwin (A&B), out of the bill while leaving the approximately 9 revocable permits (RP’s) in place that impact farmers, ranchers and KIUC.

The rationale was that A&B is under a court order, involved in active litigation with regards to its water use, has a long history of stream diversions, and thus passing legislation on their behalf was inappropriate.

The Water Land Committee voted 3 to 2 in favor to pass the amendment, but WAM Chair Donovan Dela Cruz balked, refusing to allow his committee to vote and instead announced his decision was to “defer indefinitely”.

This type of decision normally kills the bill, preventing it from moving forward in the process.

While his reasoning was not publicly stated, clearly Senator Dela Cruz was not pleased with nor supportive of, removing A&B from the bill.

As has been noted earlier, A&B will save $62,000,000 should HB1326 HD2 pass into law. And now, as a result of the amendments proposed by Senator Kahele, that financial benefit was at risk of evaporating.

According to a recent article in Civil Beat, A&B and it’s executives donated over $300,000 to state and county political campaigns during last two election cycles. Their government and community affairs person earns a salary of about $750,000 per year.

A&B is arguably the last remaining “plantation company” in Hawaii and certainly the states most powerful and politically influential landowner.

As you can see the stage has been set now for a major collision of political forces.

On one side you have those opposing what has been not so affectionately deemed “the corporate water theft bill”, versus on the other side those who support A&B and the continued un-permitted diversions of streams and publicly owned waters, for commercial purposes.

In the middle, being held as hostages of sorts, are the small farmers and ranchers. To a lesser degree, the same is true for hydro electric producers such as KIUC, who also are facing public scrutiny for failing to secure the proper long term permits.

Those opposing HB1326 HD2, believe that the threat to farmers and ranchers losing their water, had been grossly exaggerated and little if any threat actually exists.

Those supporting A&B hold those small farmers and ranchers out as if they are human shields. They demand passage of HB1326 HD2 to “protect the small farmers” yet refuse to support the measure when A&B was removed, while the farmers remain protected.

During yesterday’s Senate floor session the gallery was packed with people there to witness what was expected to be a dramatic show down. The overflowing crowd spilled outside where they became loud and rambunctious at times, the chants and songs echoing throughout the rotunda.

Sitting in the gallery with friends and associates from all islands, we observed the Senate at work, waiting patiently for some senator to make the move.

I watched along with the others, and began noticing the tell tell signs, that something was about to happen. Papers were delivered to the clerk on the floor, then a few minutes later copies were distributed to the members. This no doubt was a copy of some amendment that was about to be introduced.

Out of no-where, a Senator called for a recess. The floor cleared and the Senators headed into a private caucus. 15 minutes or so later they emerged, and soon those in the gallery with “text access” to various Senators on the floor, knew that whatever maneuver had been planned, had been called off.

There were no reasons given, nor any specific information provided as to what action had been planned and then canceled.

So for now, HB1326 HD2 remains dead, tenuous as that death might be.

The reality of the process is that 13 senators can revive it at anytime.

Yesterday the community showed up. Over the past few weeks, thousands of emails and telephone calls have poured into the office of the 25 senators.

Without this active community engagement, without the community being unrelenting in shining a light on this bill and the related legislative actions, it is without question that our water would by now have been sold down the river.

But fortunately, the community has shown up, and consequently those whose intent is to fight back against big money and special interest have prevailed.

The legislative session continues through April and until sine die, the end of session, anything can happen.

Mahalo to all for taking ownership of your government.

Sent from my iPhone 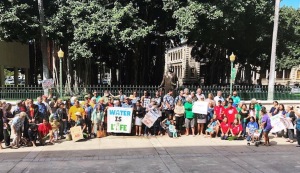