This time next week it will all be over. At least I hope and pray that is the case, and that the Biden/Harris ticket win’s by a landslide. Anything less than a decisive victory in both the popular vote and the electoral college will result in a contentious and potentially very dangerous, hot mess.

Anger, angst, and apprehension are the words that come to mind, describing the emotions that surround this moment in time. For me, the dominant feeling deep inside my na’au is apprehension, not knowing what is coming next and feeling powerless to change whatever that might be. Many, on both sides of the aisle, are consumed by angst, and deeply anxious about the future of the nation and the world.

The angst and apprehension I understand. But the anger coming out of the mouths and off the keyboards of far too many people is scary and dangerous.

I encourage all to take it down a notch or two. Writing a weekly column on politics, maintaining a political blog, and in general, being active in policy and politics statewide – puts me into contact with individuals representing all political persuasions. The vast majority of people who respond to my missives are positive, thoughtful, and caring residents seeking to share their thoughts and ideas.

In the past few weeks however, the incoming hate, anger, and vitriol have reached levels that are beyond disturbing.

A column I penned recently, An open letter to Kamala Harris – pre-debate notes from the heart, triggered many on the right to unload their anger. The mordant, corrosive, and virulent language displayed a bitterness that words cannot do justice.

There is a consistent theme to the messages, as the profanity usually precedes words such as Democrat, Socialist, or Communist. The writer would speak of “people like you who are ruining our country.” Some would accuse Vice President Biden of intending to “take our country way too far to the left” while at the same time saying he was “a puppet of the big corporations.” Go figure.

In the short time since that column was published, I have attempted to reflect a bit on what might be the root cause of such deep-seated hate and anger. More importantly: What can be done to heal such a deep and jagged tear in the fabric of our national community?

Those writing appear to be regular people, working folks just like you and me. But clearly, they are unhappy, angry with their lot in life, and feel a need to lash out.

I will not blame President Donald Trump for this, as he is but a symptom of the disease. Yes, he fans the flames and yes he seeks to glorify and legitimize the divisiveness for his own ends, but he didn’t start this fire. It has been smoldering for generations.

Income inequality, the scapegoating that accompanies it, and a dearth of hope and opportunity are at the root of it, of this I have no doubt. A majority of people in the world wake up early every morning scrambling simply to survive, while a handful at the top accumulate greater and greater riches literally by the hour.

According to Oxfam, the world has 2,000 billionaires who collectively have more wealth than the 4 billion people, roughly 60 percent of the planet’s population. Forbes and Business Insider report that Amazon’s Jeff Bezos is currently the wealthiest person on the planet with a net worth of $113 billion and on track to become a trillionaire by 2026.

Meanwhile almost half of workers in the United States earn less than $15 an hour. Here at home, most of our residents are working two or three jobs, and still can’t afford proper housing or healthcare. Too many people get up too early, and work far too long and hard every day, only to feel like they are getting nowhere.

It’s no wonder people are angry.

And while I fervently hope that former Vice President Joe Biden is elected on November 3, we can’t count on him alone to put the fire out. To truly douse the coals of angst, apprehension, and anger means addressing the root cause of income and wealth disparity in our country. To do this successfully requires working men and women in blue states and in red states to realize that we are not each other’s enemy.

Instead of fighting each other, we must remember that we are all in this together. Only when we unite against the common enemy of economic injustice, will we make the progress needed and put the smiles and laughter back where it belongs. 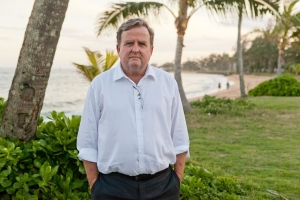