What does the International Film Festival and Forum on Human Rights held recently in Geneva Switzerland have to do with Kauai?

Earlier this month, I was honored to be invited and to speak at this event following the screening of “Poisoning Paradise” – Executive Produced by Pierce Brosnan and Produced and Directed by Keely Shane Brosnan and Teresa Tico.

The program described the film as follows: “In their meticulously researched documentary Poisoning Paradise, film-makers recount the transformation of Hawaii from agricultural land to testing grounds for the powerful agrochemical industry and the response of many communities who are trying to reclaim their land, their health and their right to live in a safe environment.”

The panel consisted of myself, Laurent Gaberell, an expert in agriculture and biodiversity affiliated with the Swiss organization Public Eye, Baskut Tuncak, the Special Rapporteur on the human rights implications of environmentally sound management and disposal of hazardous products and wastes, and Hank Campbell of the American Council on Science and Health. The moderator was Maren Peters, a journalist and editor of the economic section for Swiss Public Radio.

While most of us working on the issue surrounding the health and environmental impacts of the agrochemical industry here in Hawaii are keenly aware of the local impacts to our communities, streams and coastal waters – it is easy to forget that this is an international issue impacting communities on every continent.

The human rights principle we were there to discuss:

“Man has the fundamental right to freedom, equality and adequate conditions of life, in an environment of a quality that permits a life of dignity and well-being, and he bears a solemn responsibility to protect and improve the environment for present and future generations.” Stockholm Declaration on the Human Environment (1972), Principle 1.

The audience of several hundred and the panelists were all clearly struck by the superimposition of a “paradise island in the pacific” with the experimental fields of corn, large quantities of restricted use pesticides being used, the obvious health and environmental impacts, the refusal of the industry to even disclose the pesticides they were using, and the money and political influence the international agrochemical companies wield in our community.

It is important to note that in Switzerland, GMO crops and foods are banned. Labeling of food is not an issue because the products are simply banned. There are no experimental fields of anything growing in Switzerland. Also banned in Switzerland are the pesticides atrazine and paraquat, which are both used in copious amounts near neighborhoods, schools, parks and other public areas in Hawaii. Atrazine is responsible for polluting international waterways in Europe, is one of the largest polluters of groundwater in the western world, and shows up in Hawaii waters on a regular basis. Paraquat has been banned in 38 different countries but continues to be used along with atrazine, extensively in Hawaii.

While in Switzerland I also met with members of the Swiss Parliament, the United Nations, and various groups representing academia, activism, and the international media.  Without exception, the fact that Syngenta, a Swiss based company is using chemicals in large quantities on Kauai (albeit now via Hartung Brothers) that are banned in their home country, elicited reactions of incredulousness, embarrassment and compunction.

Right or wrong in their thinking, what seems so outrageous to people everywhere who hear our story is that it is happening here in the jewel of the pacific, ostensibly in America, the richest and most powerful country in the world. And it is not lost upon them that the people that suffer most from the abuses of these companies, are the indigenous people who once governed the lands upon which these poisons are now being sprayed. 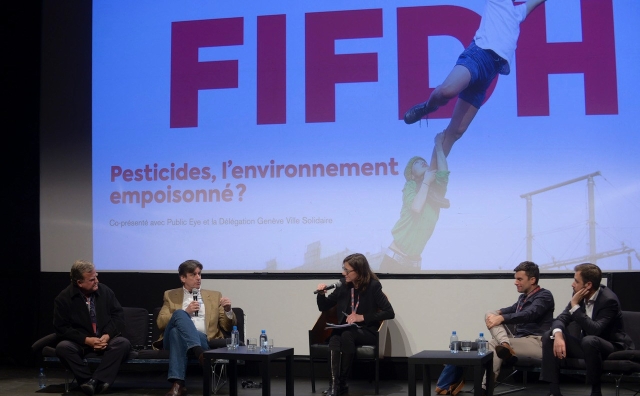